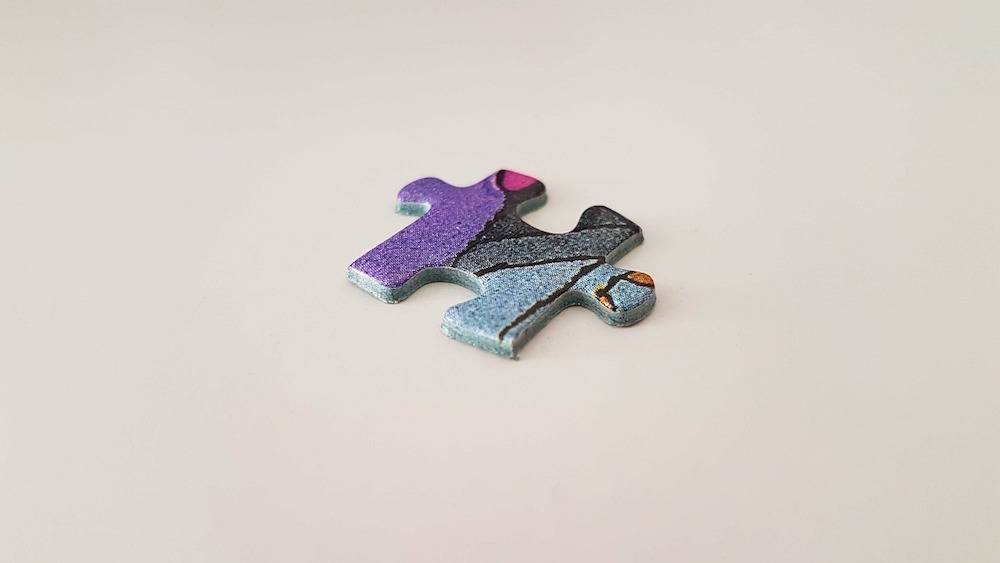 It’s my belief that every single one of us has an unfinished jigsaw puzzle in our home, somewhere or other.

A few months ago on a Saturday afternoon, I decided to head downtown with no agenda whatsoever. My aimless wandering eventually led me to the back corner of a small gift shop where there were many puzzles for sale. After much consideration, I settled on a medium difficulty puzzle featuring a beautiful illustration of Dorothy (“the Dorothy”). The next day, I completed that Dorothy puzzle in a few hours’ time and had a marvelous time doing so.

“Wow, it turns out I’m a puzzle person!” I happily thought to myself.

So a week later when my older sister offered to lend me a few of her own puzzles, I gratefully accepted. Before I knew it, I had all 500 pieces of a new puzzle spread out across my dining table and I was puzzling away. I made some progress, but this puzzle was a lot harder than the Dorothy puzzle. Not only were the puzzle pieces smaller, they were also far less intuitively shaped. I found myself getting more and more frustrated as time went on.

“I’ll leave this for later,” I thought.

Fast forward to a month later, and that puzzle had become a pretty heavy weight in my mind. Each time I passed my dining room table (in other words, multiple times per days), I’d think “There’s that darn puzzle, I really have got to finish that thing,” or “One of these days I’ll get to finishing that puzzle.” This went on for a number of weeks.

Then, just yesterday, I was having coffee with a new acquaintance and she mentioned a term I’d never heard before: Appropriate Effort. Appropriate Effort means that when you’re working on something, you know why you’re making that effort, and that it’s the right effort to be making. As my new friend across the table was elaborating on this idea, I suddenly thought of my puzzle.

I knew what I was going to do.

I breathed a huge sigh of relief and promised myself this: if ever there’s an “unfinished jigsaw puzzle” in my home that’s not doing me any good and doesn’t deserve my Appropriate Effort, I’m getting rid of it.

What “unfinished jigsaw puzzles” do you have lying around your house that aren’t doing you any good? Maybe it’s that project that you never had any intention of finishing, or those jeans that fit when you were twenty years old … whatever it is, I can tell you this: getting rid of it will be liberating beyond words.